Music / The Piper at the Gates of Dawn 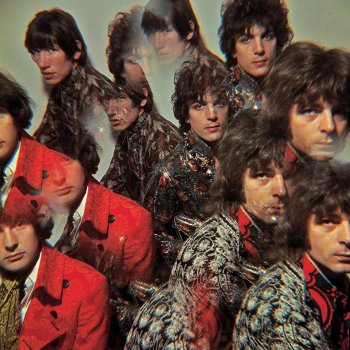 Floating down, the sound resounds around the icy waters underground.
"I’ve got a bike, you can ride it if you like
It’s got a basket, a bell that rings
And things to make it look good
I’d give it to you if I could, but I borrowed it

You’re the kind of girl that fits in with my world
I’ll give you anything, everything if you want thing"
—"Bike"
Advertisement:

The Piper at the Gates of Dawn is the debut studio album by Pink Floyd, released in 1967. Released long before the band developed the Progressive Rock style that would come to define them in the public consciousness, this album is starkly representative of the Psychedelic Rock sound that they had started out with in the early phases of their career, thanks in no small part to then-frontman Syd Barrett's knack for eccentric and esoteric sound and subject matter. That said, they weren't exactly unknowns when the album released; they'd already built up a mainstream following over the course of that year, and by the time Piper released they were already seen as an important enough act in the psychedelic scene to influence the likes of David Bowie years down the road.

Aside from the band's early prominence and influence, The Piper at the Gates of Dawn is most notable for being Pink Floyd's only full-length album that features Barrett on every track. He would suffer a rapid and never-quite-explained mental decline over the course of the next year that resulted in his presence in the band being rapidly reduced before ultimately being kicked out after their second album. As such, this album is an integral part of his legacy.

Upon release, The Piper at the Gates of Dawn was a strong commercial success in the band's native UK, peaking at No. 6 on the UK Albums charts. In the US, where it was released with a considerably different tracklist (as was common practice for British albums at the time), it performed far more modestly, peaking at only No. 131 on the Billboard 200. It would continue to maintain strong sales in Britain in the decades ahead, peaking at No. 44 during its 30th anniversary and at No. 22 ten years after that. It would eventually be certified gold in the United Kingdom and Italy.

The album was supported by exactly zero singles. However, the British non-album track would be added to the American release, with the track "Flaming" (which was cut from the latter) being released as a non-album single Stateside.

Followed by A Saucerful of Secrets.

That trope's something I can't explain: