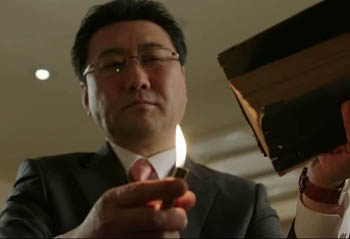 Here's how to dispose most incriminating evidence: by burning.
"Fire! To destroy all you've done!"
— Fire, The Crazy World of Arthur Brown
Advertisement:

The act of blowing up or burning down the evidence implicating you in some crime. Very popular among evil corporations and governments who go as far as torching entire city parts to cover up something particularly nasty. Often takes place when the heroes are in the middle of discovering said evidence.

Attempting this is very much Truth in Television. Part of firefighter training is to be on the lookout for signs that fires might have been started to conceal another crime, such as noting if a window was broken before they put an axe through it to get into the building. Also known to happen in cases of Insurance Fraud. As forensic science has improved, it's often the case that arson will create more evidence than it destroys, though it's a very mixed bag whether the writer of a story will actually know this. This trope is often averted in real life; house fires generally can't reach the temperatures that would be necessary to completely consume a human body, and any competent forensic pathologist would be able to tell whether a person died before or during a fire just by checking whether there's any soot or burns in the airway and lungs.

Compare Destroy the Evidence which deals with characters covering up the crimes of others. Also compare Gas Leak Cover-Up, Kill It with Fire, and Revealing Cover-Up. Furnace Body Disposal can also easily come into play.