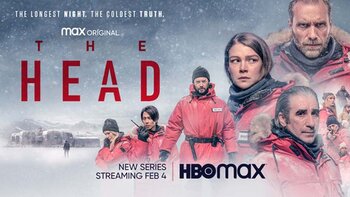 The Head is a 2020 English-language Psychological Thriller Mini Series produced by the Spanish production company The Mediapro Studio and directed by Jorge Dorado.

The series is set in an Antarctic Research station, Polaris VI. As the Antarctic winter begins, with the sun disappearing for six months, most of the staff leave while a small skeleton crew remain for the dark winter months to continue their research, under the leadership of renowned biologist Arthur Wilde. But when the winter ends, the base's summer commander Johan Berg returns to find the entire winter crew dead or missing. Among the missing is his wife Annika. To find Annika, and uncover what happened at Polaris VI and who was responsible for the killings, Johan must reply on Maggie, the traumatized young doctor who is apparently the Sole Survivor of the crew.