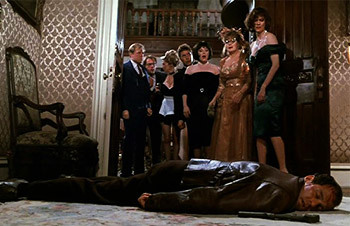 Mr. Boddy's role had been revealed.
"I know I'm human. And if you were all these Things, then you'd all just attack me now, so some of you are still human."
— R.J. MacReady, The Thing (1982)
Advertisement:

A group of people are invited to attend a get-together, usually held at an Old, Dark House often in the middle of the countryside or (more recently) on someone's private island, by a mysterious and/or eccentric host. Suddenly one of the guests (or even the host) is murdered and circumstances prevent the others from leaving, usually a heavy storm or a cut bridge, or even both.

Our heroes soon learn that one of their party is actually some manner of villain (typically The Mole, though a random escaped criminal is not unheard of), but, for various contrived reasons, that's all the information they're going to get. So it's up to them to work out which of their supposed colleagues is really The Mole before he can kill them all. And you can't trust anyone until you do. Luckily, however, there's (usually) only one mole involved.

Often results in everyone being Locked in a Room. This can be self-imposed, as our heroes can't chance The Mole reporting back to headquarters, but a character may force this upon everybody, which will usually raise everybody's tension. Circumstances will always contrive to prevent our heroes from getting in touch with the outside world to find out who The Mole is, which may range from the aforementioned storm knocking out the telephone poles, to someone cutting the telephone lines, to outright smashing all the phones to pieces. Accusations are hurled, secrets are uncovered and more murders are committed as the Dwindling Party tries to determine who is the murderer in their midst.

General outcomes of this plot:

In a well-done example, the audience will work out who The Mole is only seconds before the heroes do, though they'll typically be led to an incorrect guess from early on.

Non-recurring characters are subject to being killed off one-by-one by The Mole. Of course, strictly speaking, no one is above suspicion, even our heroes, and at least one member of the group will panic, accuse the heroes, and run off to a certain demise. The audience (usually) knows better.

Named after the 1939 Agatha Christie novel And Then There Were None which was originally titled Ten Little Niggers and then renamed Ten Little Indians before arriving at its current name.

Often the modus operandi in a Reunion Revenge. Occasionally a Final Girl or other survivor(s) may be spared, but if the writers are really bloodthirsty, it only ends when they all die (or, if you're at the beginning of the series, Everybody's Dead, Dave); if they're feeling devious, they may also throw in a few instances of Suspect Existence Failure. Newer installments may have this combined with/be the byproduct of a Deadly Game Or a Hunting the Most Dangerous Game Scenario. The actual game version of this setup, where it's one or some killers against everyone else, is Social Deduction Game. Don't be surprised if a Mexican Standoff or two pop up, especially for the finale.

This trope goes together with A House Divided like peanut butter and jelly.