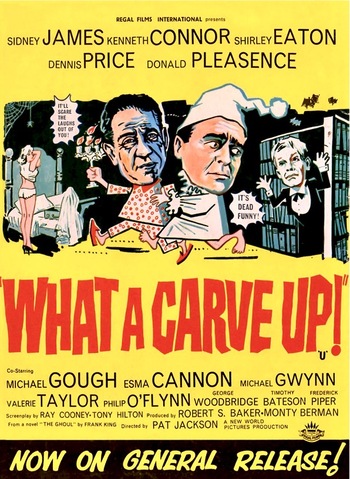 What a Carve Up! is a 1961 British comedy-horror film, directed by Pat Jackson and starring Sid James, Kenneth Connor, Shirley Eaton, Donald Pleasence, and Michael Gough. It was released in the United States in 1962 as No Place Like Homicide. The film was loosely based on the novel The Ghoul by Frank King.

Ernie Broughton's uncle Gabriel has just died but to claim his inheritance he must spend the night in the ancestral home with the rest of his relatives. Before long the guests begin to drop dead.

The film figures extensively within Jonathan Coe's 1994 satirical novel of the same title. The novel's protagonist, Michael Owen, becomes obsessed with the film after having first watched it as a young boy. Additionally, the last part of the book follows the plot of the film.

What a Carve Up! contains examples of: