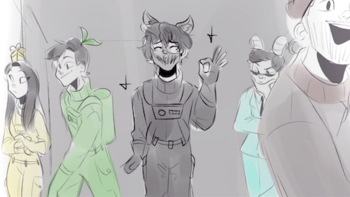 They seem like a nice bunch, don't they? Give it a few minutes, chaos is about to unfold.note From left to right: TinaKitten, Sykkuno, Corpse Husband, Disguised Toast, and Jacksepticeye
Advertisement:

Babushka: the Movie is an animatic web video by Morci Animations

, an Argentinian artist and animator known for making animatics based on the musical Hamilton. The video depicts a famous round of Among Us with proximity chat played by a group of streamers in late 2020, with most of the players being members of the streaming/online content group "Offline TV and Friends" or the e-sports brand 100 Thieves. The players in this particular round are Valkyrae, Sykkuno, Jacksepticeye, Corpse Husband, Disguised Toast

The round begins with Sykkuno and Valkyrae (or Rae) as the impostors, but in the middle of a long stretch of streaming, the players aren't focused purely on the game; Toast and Fuslie/Leslie are hiding in a corner putting together a restaurant order and Sykkuno needs to take a bathroom break. So while Masayoshi/John, Brooke, and QuarterJade/Jodi go about doing their tasks and exploring the ship, Valkyrae and a group of crew mates including Tina, Jack, and Corpse gather around to protect Sykkuno while he's away from the game. During this break, Valkyrae explains how in the previous round of play Sykkuno had been an impostor and revealed this fact to her, and the two had worked out a Trigger Phrase of "babushka" that she would use when she wanted Sykkuno to kill on her behalf.

As luck would have it, Sykkuno returns from his bathroom break at exactly the right time to hear Rae say "babushka" and mistakes it for a legitimate use of the code word, so without hesitation he kills Tina, the closest crew mate. While Jack and Corpse are paralyzed with laughter over the unlikely happening, a shocked and shaken Rae recovers enough to kill Jack, then calls in a favor that Corpse owes her to get him to stay put and not report the bodies. With that set, a frantic and somewhat panicky Rae and Sykkuno set off, looking to kill enough players to win the game before their guilt can be exposed, knowing that either someone stumbling upon the grisly scene in the launch pad or even a meeting being called and showing that Jack and Tina are dead will probably be enough to expose them.

Morci's video can be found here

, most of it is based on video of the round published by Valkyrae, which can be seen here

This Web Animation contains examples of: