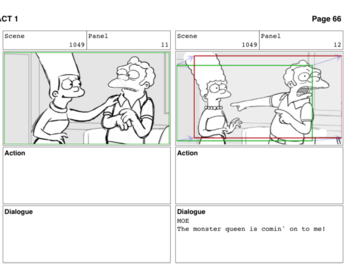 For any video or film project, animated or live action, a storyboard is basically a technically-precise comic book adaptation of the script, used for planning purposes. It shows the shots in a film or episode in sequence, as a plan for blocking, types of shots, angles, or composition. Usually broken down by scene, and often done on individual file cards so they can be rearranged to suit, then reprinted as a book for use on set. They are an absolute requirement for animation, and are in common use in most live action films.

Can range from very simple to extremely detailed; Hayao Miyazaki has been known to sit down and draw all the storyboards for his films himself, in order, playing back the movie that already exists in his head. If the storyboard drawings are arranged as a timed slideshow synced to the audio track (recorded first in most Western Animation) it forms a crude Animatic, and this might show up in the DVD bonus features as a deleted scene; most scenes are cut before final animation is done for either story or budget reasons.