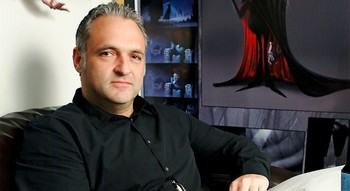 Genndy Tartakovsky (born Gennady Borisovich Tartakovsky, Геннадий Борисович Тартаковский, January 17, 1970) is a Russian-American animation director, producer, and one of the greatest minds to ever come out of classic Cartoon Network.

Born in the USSR to Ashkenazi Jewish parents, Tartakovsky moved abroad with his family, afraid of anti-Semitism, when he was seven years old. First they went to Italy, where he picked up art from their German neighbours' daughter. Upon his arrival in The United States, he got his first exposure to American cartoons and developed a deep love of comic books, Looney Tunes, and Humongous Mecha anime.

Genndy would attend the California Institute of the Arts a.k.a. "CalArts" (because he was too late to apply for a business school). There he embraced his future career as an animator and made his first two shorts. His senior thesis film, Changes, was later remade as the pilot for Cartoon Network's first original show, Dexter's Laboratory. While schooling, he formed a strong friendship with Craig McCracken (The Powerpuff Girls) and Rob Renzetti (My Life as a Teenage Robot), which often shows in their cooperation between series.

Following his work on another dialogue-heavy show with Thick-Line Animation was one that had neither: Samurai Jack, a hugely ambitious series with a unique, cinematic style, equal parts Akira Kurosawa, Spaghetti Western and anime, widely considered to be both his and Cartoon Network's greatest accomplishments. Plans to end the series with a theatrical feature were put on hold when The Powerpuff Girls Movie flopped and he would spend the next decade pitching it to various studios in between other projects.

After creating the Star Wars: Clone Wars mini series, Tartakovsky left Cartoon Network to start his own independent studio, The Orphanage. The timing could not have been worse, as the studio's formation coinciding with both the economic crash in 2008 and the downfall of traditional animation in America. In the end, the studio produced a handful of commercials and a single season of Sym-Bionic Titan for Cartoon Network which, while well-received, was dismissed by Cartoon Network when the creators refused to sign a toy deal and was Cut Short when everyone involved became too involved in other projects to want to make more episodes.

Genndy made his feature directorial debut in 2012 at Sony Pictures Animation with Hotel Transylvania (admittedly because he needed work) which was a financial success. After directing its sequel, he was pegged to do an All-CGI Cartoon Popeye feature, returning to his roots, and an original project called Can You Imagine? until both got shelved, instead being put on the third Transylvania movie.

In 2017, Genndy finally got the chance to give Samurai Jack a proper conclusion when Adult Swim's Toonami block agreed to produce a mini-series, with him back in the director's chair, which would wrap up the story for good. The same year, he created Cage, a 4-issue Marvel Comics miniseries starring Luke Cage, which throws-back to the character's blaxploitation roots.

2019 has seen Tartakovsky at his most prolific thus far, with two films in development at Sony, the adult comedy Fixed and the adventure film Black Knight, and a new series for Adult Swim entitled Primal. He would also make his return to Cartoon Network with the announcement of Unicorn: Warriors Eternal. note  Primal and Samurai Jack's 5th season were produced at Cartoon Network Studios, but those were made for [adult swim]. This new series will target children and be on the main CN channel.

He has been Happily Married to Dawn David since 2000, around the time his popularity as an animator really took off (he spent part of their honeymoon storyboarding the pilot for Samurai Jack). They currently have two sons.

Tropes applicable his works include: