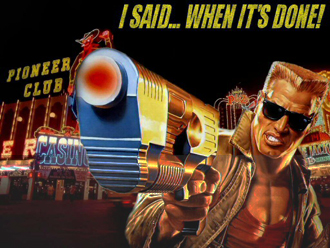 Took them long enough, but it's done.

"What? Did you think I was GONE forever?"
— Duke Nukem, Duke Nukem Forever trailer.
Advertisement:

Development Hell is what some works go through if there's too much Executive Meddling, lawsuits, and so on. The fanbase is waiting more and more impatiently, but nothing gets done.

Sometimes, however, divine intervention happens. After many, many years, or even decades, of promises, the work is finally released.

Of course, the finished product is almost always significantly, or even completely, different from what the creator originally had in mind, if for no other reason than the conditions imposed by the passage of time.

See also The Shelf of Movie Languishment, where it is finished, but not released. May involve What Could Have Been if the project saw changes after being dusted off. Compare Un-Canceled for serialized works.

Please only list examples here that have actually left development hell. Also, note that just because a title was saved from development hell doesn't necessarily mean that it's good. There are far too many examples of "saved" titles that were so bad or underwhelming that people would have preferred it stayed in development hell.