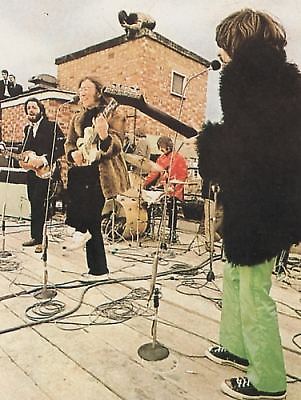 The last concert The Beatles ever held, right here.
"I'd like to say 'Thank you' on behalf of the group and ourselves, and I hope we passed the audition!"
—John Lennon
Advertisement:

Let It Be is a 1970 Rockumentary directed by Michael Lindsay-Hogg.

The last film The Beatles made before their break-up, it covers what was supposed to be the making of an album and the concert that followed. This didn't work out well because different Beatles had different ideas about what should be done with the project and how it should be done. The personal relationships between the members of the band were also decaying quite rapidly at the time, which the movie quite bluntly reveals; several scenes involve the members of the band arguing and sniping pettily with each other. The concert ended up being held on the rooftop of the building of Apple Corps.

The film was shot at Twickenham film studios and later at the Beatles' Apple Corps headquarters in London from January 2 to January 31, 1969. It was released about a year later than planned; it took that long for there to be any consensus about what the accompanying album would be like. Unfortunately, it was an incomplete consensus; while John Lennon and George Harrison were happy with it, Paul McCartney wasn't even aware of the finishing touches until they were a fait accompli. This led to a chain of events that led to the film being released in May 1970—and after Paul had issued a press release saying he was leaving the band indefinitely. Instant Harsher in Hindsight, since this film already depicted stressful relations between the Beatles.

Its Cult Soundtrack (which has its own entry) effectively became the last official Beatles album to be released as a result. It won the 1970 Academy Award for Best Score. "Let It Be", "Across The Universe", "Get Back" and "The Long And Winding Road" would become the band's final hits.

This film was long subject to Keep Circulating the Tapes, because there was no home video release since a LaserDisc edition back in 1982. The long absence of Let It Be from home video was never officially explained, although the most common rumor was that the surviving Beatles just didn't feel good about the film. However, on January 30, 2019, the 50th anniversary of the rooftop concert, an announcement was made that Peter Jackson would organize a remaster and re-release of the original film, as well as create a new documentary from some 55 hours of raw footage from January 1969, including the full version of the rooftop concert. The eight-hour documentary, entitled The Beatles: Get Back, was released in 3 parts on November 25-27, 2021 on Disney+.

Tropes present in Let it Be: