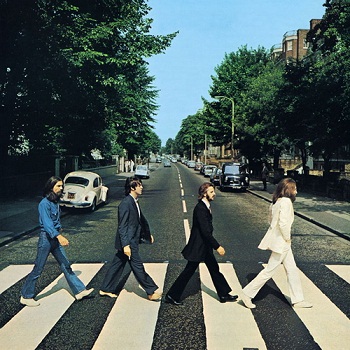 "And in the end..."
Advertisement:

Abbey Road is the twelfth studio album by The Beatles, released in 1969. It is their last recorded album, but was released as their penultimate offering; because the band split up shortly before the release of the earlier-recorded (but later-released) Let It Be in 1970, Abbey Road serves as the final studio album released during the Beatles' lifetime.

The album was recorded when there was still tension among the band members, but they put their differences aside for one last time. As a result, everyone got to shine, with George Harrison proving he was every bit as good a songwriter as John and Paul, penning 2 #1 hits: "Something" and "Here Comes the Sun". John Lennon had a chart topper himself, "Come Together", while Paul McCartney arranged the perfect Grand Finale for the band on side B and Ringo Starr created a children's classic and hit with "Octopus's Garden".

On a technical note, this was the band's first release to only have a stereo mix, as more popular music listeners had upgraded to stereo record players, or at least had mono record players fitted with stereo-compatible cartridges that wouldn't damage stereo records.

Got to be a troper, he just do what he please: