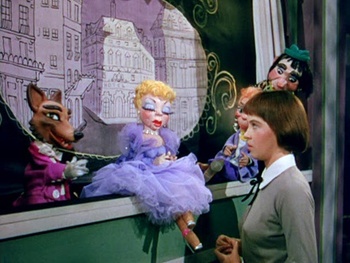 Lili Daurier (Caron) is a naive 16-year-old girl who has come to a small French town to live with a baker, her father's old friend, after her father's death. Unfortunately, she discovers on arrival that the baker is also dead. She then accepts an offer of work from the shopkeeper next door, but he almost immediately tries to rape her. Lili is rescued from this confrontation by Marc (Jean-Pierre Aumont), who happens to be a magician with a traveling circus.

The instantly smitten Lili follows Marc to the circus, where he has an act along with his assistant Rosalie (Zsa Zsa Gabor). Marc, who really doesn't want a teenager tagging along with him, get her a job as a waitress, which she immediately loses. However, she's consoled by Paul the puppeteer (Ferrer), or rather by Paul's puppets. Lili gets a job as part of Paul's puppet show act. Paul begins to develop feelings for Lili, but he can only express himself through his puppets.