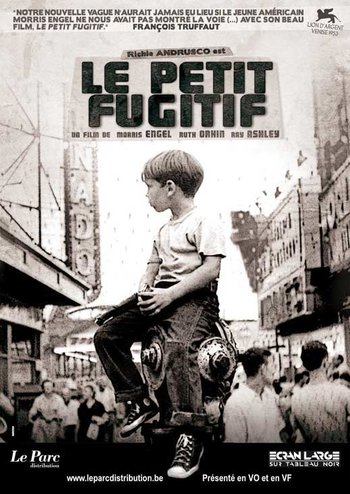 Little Fugitive is a 1953 American independent film directed by the team of Raymond Abrashkin (credited as "Ray Ashley"), Morris Engel, and Ruth Orkin.

Joey Norton (Richie Andrusco) is a 7-year-old boy living in a lower-middle-class neighborhood of Brooklyn. He idolizes his 12-year-old brother Lennie (Richard Brewster), but Lennie seems to regard Joey as a nuisance. One day, their single mother (Winifred Cushing) has to leave town to attend to her own mother, who has fallen ill. She leaves Joey in charge of his brother.

Lennie wants to hang out with his friends, but Joey insists on tagging along. Finally Lennie and his buddies play a cruel trick: they cajole Joey into firing a gun, and Lennie pretends to have been shot and killed. It works only too well. Joey, believing himself to be a murderer, runs off. He grabs the cash that his mother left for groceries and high-tails it to Coney Island, where he spends a whole day riding the rides and playing the games. Eventually, after receiving a phone call from the park, Lennie arrives at Coney Island and goes on a frantic search for his brother.

Filmed on a shoestring budget with an innovative hand-held camera. The use of amateur actors (neither Andrusco nor Brewster ever appeared in another movie), the working-class setting, and the Slice of Life story are all parts of this movie which had an influence on the French New Wave.

Will Lee, who years later would play Mr. Hooper on Sesame Street, appears as the photographer.