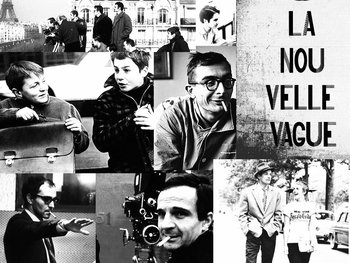 When book reviewers read in Colin MacCabe's biography of Godard that Cahiers du Cinema was "the most significant cultural journal of the twentieth century" they couldn't wait to jump on him for laying it on so thick. What do they know? There is film criticism before Cahiers du Cinema and film criticism after it. Because of the tremendous impact of the [New Wave], which sprang from its pages, there is visual culture (and the analysis of visual culture) before and after Cahiers du Cinema too...For them film criticism was a confrontation, its goal to change how films were viewed and how they were made. The magazine's polarizing "auteur theory" was attacked with the vehemence that heralds artistic breakthrough. By the decade's end, the group's first films came out.
— A. S. Hamrah, Defining Moments in Movies
Advertisement:

Whilst France was under German occupation during World War II, the screening of American movies was illegal. When the war was over, French cinemas were flooded with a backlog of films by directors such as Alfred Hitchcock, John Ford and Orson Welles, and they were consumed eagerly by several young and passionate Frenchmen. The manner in which they saw films — i.e. not as a periodic release followed by another one, but as essentially an Archive Binge — made them look at these films with a keener eye for detail. In 1951, the film journal Les Cahiers du Cinéma was established. The authors of this journal — including François Truffaut, Jean-Luc Godard, Jacques Rivette, Claude Chabrol and Éric Rohmer — would watch each of the films by one of the aforementioned directors, and identify common themes and stylistic choices within their opuses (for example, the recurring theme of an innocent man on the run in Hitchcock's films). Based on this, Truffaut published the article "Une certaine tendance du cinéma français" ("A certain tendency in French cinema") in Cahiers in 1954; in which he argued that, although films are generally made by huge teams of people (producers, screenwriters, cameramen, costumers, ETC...), the influence of the director generally overshadows that of everyone else. In other words, the director of a film can be considered its auteur (Author). Thus was born The Auteur Theory, which Truffaut and the others called "politique des auteurs."

In addition to this, these critics writing in Cahiers tended not to look too fondly on the movies the French had been making since the end of the war - feeling that they were predictable and formulaic while also criticizing how many of them were just prestigious literary adaptations. The magazine's writers referred to them as cinéma de papa (Dad's cinema) favoring directors who were outside the system like Jacques Tati, Jean-Pierre Melville, Robert Bresson, Jean Cocteau, Max Ophuls and above all, Jean Renoir, who they called "le Patron"(the Boss). They also championed the likes of Luis Buñuel, Roberto Rossellini and devoted attention to Japanese Cinema via directors like Kenji Mizoguchi.

These critics wanted movies that played with narrative conventions and defied audience expectations. Thus, they decided to try their own hands at directing, and thus, the French New Wave began. In 1958, Chabrol made what is debatably the first film of the movement; Le Beau Serge. That one was a bit of sleeper, however. It was with Truffaut's The 400 Blows (1959), Alain Resnais' Hiroshima Mon Amour (1959) and Godard's Breathless (1960), each of them a critical smash, that the movement really took off. Common techniques and themes of French New Wave movies include shaky hand-held cameras, long shots, rambling philosophical narration, references to other movies, jump cuts and other revolutionary editing techniques, existentialism, improvised dialogue, and breaking the Fourth Wall. They usually wanted you to be aware at all times that you were watching a movie and to think about it while it was still running. Initially they were practically no-budget indies, but the movies ended up being a hit with The '60s generation in France and the budgets started to go way up. The movement also took a great deal of advantage in the emerging technical equipment that was available at the time, they started using documentary techniques in live-action films, the portable Nagra recorder which made it possible to record sound directly on location ("direct sound") as well as the portable Eclair camera (first used by their hero Orson Welles in Touch of Evil) that helped a great deal in their experimental method of film-making. The movement died around the end of the Sixties at which point the original new wave moved on to different styles but they remained the dominating influence in artistic circles in France and Europe and continue to be touchstones to the present day.

To say that they were influential is an understatement. Within a few years, other countries started to take notice - first came the UK (A Hard Day's Night owes a lot to the French New Wave) and then it began to leak over to America, resulting in the New Hollywood era. Directors as diverse as Martin Scorsese, Francis Ford Coppola, Terrence Malick, Quentin Tarantino, and Wes Anderson, are incredibly indebted to the New Wave. Just as importantly, they changed how people look at movies — they shifted the focus of movie criticism from production values and acting to direction and thematic depth. Several of the movies from the movement often show up on lists of the greatest movies of all time and many of them are available on The Criterion Collection.

Tropes Associated with the New Wave: