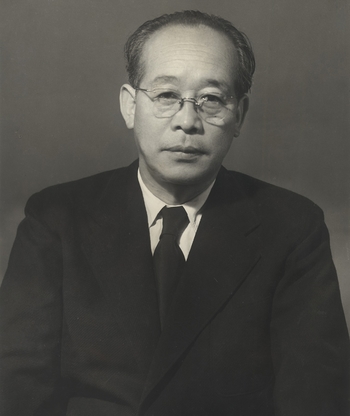 "No praise is too high for him."
— Orson Welles
Advertisement:

Kenji Mizoguchi (溝口 健二 Mizoguchi Kenji; May 16, 1898 – August 24, 1956) was a Japanese film director and screenwriter, renowned for his mastery of the long take and mise-en-scène. Alongside Akira Kurosawa, Mizoguchi was one of the first Japanese directors to receive international recognition, and he's considered, along with Kurosawa and Yasujiro Ozu, to be one of the country's greatest filmmakers.

Mizoguchi began his cinematic career in the mid-'20s, making several notable silent films that were much appreciated within Japan. After the arrival of sound, Mizoguchi started evolving his technique. He became notable for making films which had very long takes, with moving cameras and a slow rhythm. His films were set in both historical setting (i.e. jidaigeki) and contemporary Japan. He was known within Japan for his Erich von Stroheim-approach to detail, and for his rigorous research. Unlike other Japanese filmmakers (even Kurosawa), Mizoguchi was quite keen on depicting the past as close to history as possible, and put much emphasis on recreating events than on driving action. Focusing on the women and lower-class artists in his period settings, and the one movie where he depicted Samurai and Ronin (his take on the 47 Ronin legend) is a 4 hour long opus dedicated to endless discussions of honour, code, and feudal rules. As such his movies are filled with Costume Porn and are rich in visual detail.

His film Ugetsu (1953) is credited, alongside Rashomon and Seven Samurai, with sparking Western interest in Japanese cinema; it won the Silver Lion at the Venice Film Festival, and appeared in the Sight & Sound Critics' Top Ten Poll in 1962 and 1972. Mizoguchi's films won international praise from Cahiers du Cinema, and other international film-makers and his reputation has grown since then, especially with his obscure films finding an audience via The Criterion Collection.

His films, or his post-war films at least, tended to have female protagonists and usually dealt with the victimization/oppression of women by Japanese patriarchy.