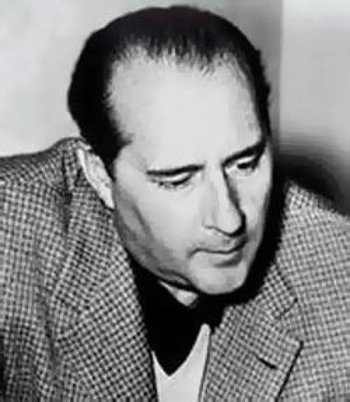 "Things are there. Why manipulate them?"
— Roberto Rossellini
Advertisement:

Roberto Gastone Zeffiro Rossellini (8 May 1906 – 3 June 1977) was an Italian director and screenwriter.

He is known today for two things. First, for being The Pioneer of Italian Neorealism, shooting on location with non-professional actors, averting "movie-ness" and getting close to the truth in films like Rome, Open City and Paisan. Secondly, for being "that guy who Ingrid Bergman gave up her first marriage and Hollywood career for", due to an on-set extramarital affair that led to both parties divorcing their spouses and marrying each other, which in turn created a scandal that was denounced on the floor of the U.S. Senate, gave Rossellini a lurid reputation, and was later regarded by her admirers as Bergman's Old Shame (though not by her). Isabella Rossellini is Rossellini and Bergman's daughter.

Some film historians acknowledge the social importance of his short film, The Miracle which had an ironic look at Catholic themes that became controversial in America and led to a landmark court ruling that declared film as an artform and so under the protection of the First Amendment, severely eroding censorship.

But what about the films themselves? As Martin Scorsese, his former son-in-law (via marriage to Isabella Rossellini), noted, Rossellini was a director who was always one step ahead and hated repeating himself. His films inspired the French New Wave and François Truffaut called him, "The father of the New Wave", the man who inspired film-makers to make their dreams a reality and go out there and make movies. He was also a pioneer, adopting all kinds of new technologies including a modified zoom which he controlled by remote. He made documentaries in India, biopics on historical figures for television and was a restless man with boundless energy and a world of ideas.

Luckily, he's found a home in The Criterion Collection, who are releasing many of his best films on DVD and Blu-ray for new audiences.