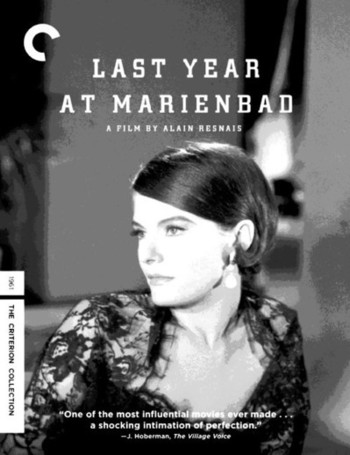 "For me this film is an attempt, still very crude and very primitive, to approach the complexity of thought, of its processes."
—Alain Resnais
Advertisement:

Last Year at Marienbad is a Surrealist 1961 French film written by Alain-Robbe Grillet and directed by Alain Resnais.

At a European chateau resort for the rich, a man runs into a woman (Delphine Seyrig) whom he claims to have met before, specifically last year at the resort town Marienbad. She repeatedly denies this, although it is unclear if she is lying or not. Further complicating things is a second man (who may or may not be the woman's husband) who keeps finding ways to demean the first, particularly during repeated games of Nim.

At least, that seems to be the plot.

It is worth noting that the movie is heavily self-referential: if you pay attention, a lot of what seems to come out of nowhere has either been subtly set up earlier, or ties into something later. It's extremely complex, and has a polarizing reputation even among art film fans.

Tropes Associated With This Movie