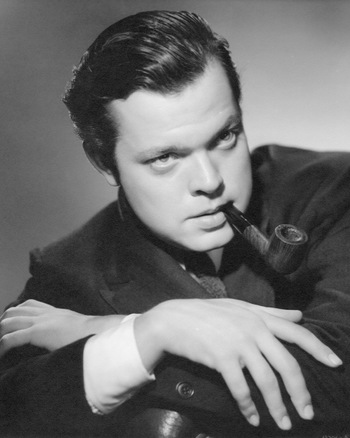 "You know, I always loved Hollywood. It was just never reciprocated."
Advertisement:

Born to a cultured Kenosha, Wisconsin family, Welles was regarded from his youth as highly intelligent, precocious and charismatic. A boy who never lacked for confidence and charm. After attending the experimental Todd School of Boys, where he was mentored by headmaster Richard Hill (who became Welles' lifelong friend), he became ambitious and restless. In The '30s, he traveled to Ireland and Europe to become a painter and ended up working in the Abbey Theatre instead. He returned to the U.S. in the middle of The Great Depression, and cemented himself as a great maverick of the American stage with a series of daring productions, originally funded by the Federal Theatre of the WPA program of the New Deal but eventually produced by his own pioneering Mercury Theatre company which in addition to working on the stage also worked on the radio and later in his first two films. Before he made his film debut, Welles made a name for himself in the American performance arts for his ambitious theatre productions that often featured daring Setting Update such as Voodoo Macbeth, and the anti-fascist Julius Caesar. Alongside this he worked in radio, (The Mercury Theatre on the Air) with his regular troupe. The event that made him into a household name across America is the 1938 nationwide broadcast of The War of the Worlds, which was so convincing that some listeners actually believed aliens had landed in New Jersey. (This story, albeit true, is often highly exaggerated. There were thousands of phone calls to police and radio stations, and some people did leave their homes, but no riots.)

All this, before he turned 25. At that age, he made his first movie for RKO Pictures: Citizen Kane on a then unprecedented contract that provided him complete artistic control, a privilege that established professionals never got, let alone an upstart who never worked in the movie business before. Citizen Kane was a groundbreaking film, technically and narratively inventive, controversial in its time and afterwards. Admired and debated for the next few decades until it became recognized and celebrated in The '60s onwards as "the greatest film ever made". It was however commercially unsuccessful in its time, even if it confirmed Welles' talent within the industry since the film's groundbreaking black-and-white cinematography and other technical feats would inspire film-makers for the next two decades. The film was Overshadowed by Controversy in its time, but it was admired enough that it received quite a few Oscar nominations and Welles won his only competitive award for writing the screenplay of Kane, which he shared with Herman Mankiewicz.

Kane cemented Welles' reputation as the Enfant Terrible of Hollywood and from there, as he put it himself later in his life, having started at the top, he would work his way to the bottom. The Magnificent Ambersons suffered actual Executive Meddling (which his Auteur License contract no longer covered) and with the exception of The Stranger, no Welles feature would ever achieve commercial success. Welles eventually dropped out of the mainstream of American cinema entirely by the end of the decade. The one brief exception was 1958's Touch of Evil which again, led to Executive Meddling. He would never quite enjoy the budget and freedom of Kane, and would resort to making movies (very cheaply) in Europe by getting funding from multiple sources as well as his own acting fees. This ad-hoc means of production however created numerous rights issues in later decades which played a part in making many of them rare and hard-to-see. It took forty years for the quagmire of The Other Side of the Wind to resolve itself, which is the extreme version of this. Welles also resorted to using his fees as an actor to fund his films. The most famous of these parts and with the exception of his own directorial ventures, the greatest film he appeared in, was his performance as Harry Lime in The Third Man, whose famous speech was improvised by Welles himself.

The majority of Welles' life was spent in an itinerant manner, planning several productions, writing several scripts and doing many projects at once. Much of this was unfinished, most never went past concept, and the films that were made (while critically acclaimed, technically and narratively inventive, and visually gorgeous) were even more obscure than Citizen Kane, whose belated re-evaluation paradoxically lent Welles the taint of being a One-Book Author, and an artist who peaked early. On the other hand, Welles remained a major public figure and global celebrity, in demand for talk shows, commercials, voice-over work, character actor and villain roles. Some of the activities from this time endures in popular culture, most notably a frozen peas commercial

. His tagline in commercials for the Paul Masson winery, "We will sell no wine... before its time

," became a meme in The '70s. He also became overweight in his later years, leading to many jokes relating to the fact that his final role would be that of a planet. Which is both sad and funny, because his last role really was a planet.

He died of a heart attack five days after finishing recording the voice of Unicron for the 1986 Transformers: The Movie. As such, Welles is a popular Historical Domain Character and a favorite for impressionists. Maurice LaMarche is often called to do impressions of him. Has also been played by actors Vincent D'Onofrio in Ed Wood (with the voice dubbed over by LaMarche), Angus MacFadyen in Cradle Will Rock and Christian McKay in the Richard Linklater film Me and Orson Welles. In The Night That Panicked America, a 1970s recreation of the War of the Worlds broadcast, he's played by Paul Shenar, and in Heavenly Creatures, he's played by Canadian actor E. Jean Guérin

As an artist and a film-maker however, Welles codified the concept of the film-maker as artist, transforming the idea of cinema as factory product, and the profession of a film director, inspiring pretty much every post-war film-maker across the world. Despite being quintessentially American (born in Wisconsin and culturally Midwestern), he became an international icon, who had a far better reputation outside his home country. It was only at the end of the 1950s that Kane was "rediscovered" as a masterpiece, and in the 1962 Sight & Sound poll critics voted it the greatest movie ever made for the very first time, a feat it maintained for the next six decades until 2012.note This despite the fact that it didn't even show up in the magazine's first poll ten years earlier. Today, scholars and cinephiles now recognize that his second career in Europe also includes very strong work. Thanks to later reappraisals, the revival and rediscovery of later films like Touch of Evil and F For Fake, Welles is today seen and celebrated as one of the most daring, artistic and ambitious film-makers to have ever worked in the medium.

On account of Orson Welles' huge itinerant life and career, and the incomplete and inaccessible nature of his later work, a definitive single-volume biography of his whole life is pretty elusive. So far researchers have managed to establish with a good degree of authority Welles' early career in books like Young Orson: The Years of Luck and Genius on the Path to Citizen Kane by Patrick McGilligan. Robert S. Carringer's books on the production of Citizen Kane and the full publication of the shooting script of The Magnificent Ambersons are key works on his transition from stage to film, and insightful on Welles' production methods. Welles also left behind important oral histories, books of interviews, such as Peter Bogdanovich's This is Orson Welles. 2013 saw the addition of two more books: My Lunches With Orson (by Henry Jaglom, which gives a rare insight into late-period Welles as well as having him far more uncensored, candid, and off-the-cuff than he usually is in other interviews), and Orson Welles and Roger Hill: A Friendship in Three Acts by Todd Tarbox (which chronicles the decade-long friendship Welles had with his headmaster and mentor Roger Hill). But much like many of the characters in his movies, there's no last word written on Orson yet.

Welles as an actor only:

"We know a remote farm in Lincolnshire where Mrs. Buckley lives. Every July, peas grow there..."
"Don't you think you really want to say "July" over the snow? Isn't that the fun of it?"
Feedback