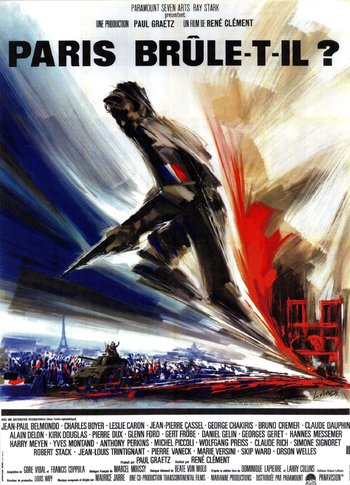 Paris brûle-t-il ? (Is Paris Burning?) is a 1966 historical film directed by René Clément, based on a screenplay by Gore Vidal and Francis Ford Coppola, based itself on a book by Larry Collins and Dominique Lapierre. It depicts the events leading up to the Liberation of Paris from the forces of Nazi Germany in August 1944.

The title comes from Adolf Hitler's question to his chief of staff Alfred Jodl on the eve of the liberation of Paris (August 25): "Brennt Paris, Jodl?". The German military governor of Paris, General Dietrich von Choltitz (Gert Fröbe), had been ordered to destroy the city rather than let it fall undamaged into the hands of the Allies.

The film follows historical events as Dwight D. Eisenhower refuses to divert troops to liberate Paris. His hand is forced by the French military leader, Philippe Leclerc de Hautecloque, and by a Resistance uprising in the city. Von Choltitz keeps details of the uprising from the German high command in an effort to save the city being destroyed in retaliation. The film follows his turmoil as a soldier and as the man who doesn't wish to be seen by history as the cause of a beautiful city's destruction. In this he is helped by the intervention of the Swedish consul, Raoul Nordling (Orson Welles).

The film looks not only at the taking of Paris by French and American troops but at rivalries within the Resistance. Of the two main sections, the branch loyal to General Charles de Gaulle was against an uprising while the branch linked to the communists, led by Henri Rol-Tanguy (Bruno Cremer), believed action was necessary. De Gaulle tried to overcome communist influence during and after the Liberation, believing the communists planned to take control of the city and then of France.

For a political contrast on resistance movements, compare The Battle of Algiers, made the same year. See also Diplomacy, a recent take focusing on the story of Choltitz and Nordling.

Not to be confused with Paris Is Burning, which plays on the title.