Film / The Battle of Algiers 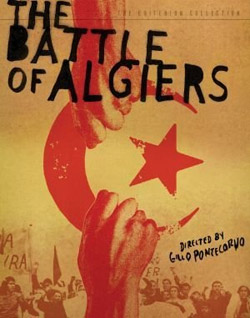 The Battle of Algiers (Italian : La battaglia di Algeri, Arabic : معركة الجزائر) is a 1966 film by Gillo Pontecorvo, and is a dramatization of the Algerian War of Independence. The story begins with Ali La Pointe, a card sharp in the cramped slums of Algiers, the capital city of French-controlled Algeria. Imprisoned, he joins the rebel group FLN and takes up arms against the colonial French government. After a few skirmishes with French police, reprisal killings spur ever-worse reprisal killings as the native and colonist populations are radicalized against each other. A UN vote for independence comes and goes as a general strike is called. Afterward, a French military expert, Colonel Philippe Mathieu, is brought in to pacify the region, gain intelligence, and destroy the FLN leadership.

A critical favorite, the film has attracted no small amount of controversy over the years. France banned the movie until 1971. It has been used as a how-to for many left-wing groups worldwide (notably, the Black Panthers used it as a training film in the '60s), and, conversely, was screened by the Pentagon in 2003 as a primer on counterterrorism.

Compare Outside the Law, a 2010 French/Algerian film about three Algerian brothers involved in guerilla warfare inside France.

The Battle of Algiers provides examples of the following works: