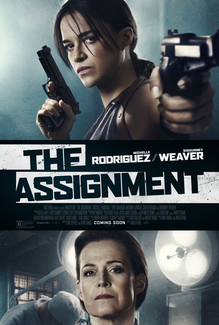 The Assignment is a 2016 action drama film starring Michelle Rodriguez and Sigourney Weaver as a hitman and psychotic doctor respectively. The film starts with Dr. Rachel Jane (Weaver) being held in a psychiatric institution involuntarily, having been judged incompetent to stand trial on a number of charges related to operating an illegal clinic where several people were killed. She recounts what led to her coming there for Dr. Ralph Galen (Tony Shalhoub) the psychiatrist assigned to assess her. Jane relates how her brother Sebastian was killed by the hitman Frank Kitchen (Rodriguez) for unpaid debts to criminals. Through an underworld contact, Jane has Frank kidnapped. After this, she performed an involuntary sex reassignment rendering him physically female for revenge. He wakes up in a hotel room and discovers this to his horror, before setting out for revenge on her in turn.