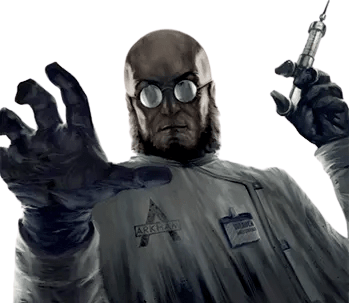 "I look forward to breaking you..."
"Well, that was fun! I'm glad you all enjoyed it. Did you enjoy it? You better have enjoyed it, or you're next on the operating table! Got a sniffle? Come to me! Oh, feel a scratch? Come to me! Oh, you bruised your elbow? I'll take out your kidneys and replace it with a brain! Two brains for the price of one! Hehehehehehehe!"
— Markiplier, after playing Surgeon Simulator 2013
Advertisement:

Ah, medicine! The wonderful science of putting people back together... or pulling them apart.

Let's face it, there's just something inherently creepy about medical doctors. Their profession is one that centers around guts, organs, blood, and bones, things that could make the most hardened badass vomit on the spot and they don't even flinch during their operations day after day after day. They can take a knife to a man's flesh, open him up like a zip-lock bag, do lord-knows-what to the insides of their patients, and close them up again, ready for the next patient. And they're always so... jolly.

This guy? This guy is all of that wrongness collected and made real.

This is the guy that uses his knowledge of the workings of the body (or of the mind) to do evil, abuses the authority he has from his doctorate to practice freakish and horrific experiments or harvest organs, proving that Science Is Bad.

Of course, for all his insanity, the doctor may in fact be a Bunny-Ears Lawyer who actually knows what he's doing. Patients may be terrified by the way he acts and the bizarre treatments he puts them through, but when the doctor is done with them they're actually cured.

This has happened often enough in Real Life (notable in the original trope name, "The Mengele", named after infamous Nazi doctor Josef Mengele) that there's a branch of medical ethics devoted to figuring out what you can do to your patients For Science!, and (at least in the USA) every hospital and university has a committee whose entire job is to oversee research with human subjects. It's generally agreed that you must tell people you're experimenting on them, why, what the risks are, what they get out of it, and give them the opportunity to say no. The Other Wiki has more information than you require.

A supertrope of Deadly Doctor (a combatant in medical garb) and Psycho Psychologist (psychologist/psychiatrist who commits evil/unethical/malicious deeds with his expertise). The counterpart of Mad Artist, Mad Mathematician, and Mad Scientist in the field of medicine (of course as with all the "Mad Genius" archetype sub-tropes, these are not mutually exclusive and often overlap — medicine does require scientific research and a Mad Artist could use expertise gained as a physician, mathematician and/or scientist in creating their insane artwork). Could be an Evilutionary Biologist. Some may have a Morally Ambiguous Doctorate. For unintentional examples, see Comically Inept Healing.

If the doctor in question is a Jerkass, then you have Dr. Jerk. Of course these two could overlap literally.