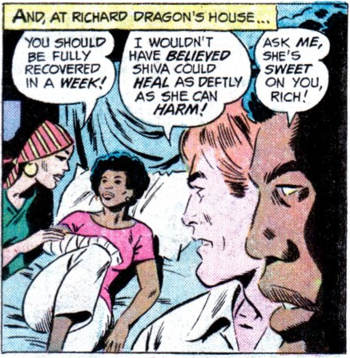 The world's deadliest assassin demonstrates that harming and healing are two sides of the same coin
"Well... as long as I'm around... those who deserve death shall die, and those who don't shall live."
— Kong Que, Feng Shen Ji
Advertisement:

In order to better learn to heal and treat patients, modern doctors spend years in difficult, specialized study before they are even allowed to begin practicing. Not for nothing is their profession among the most respected in the world. Surely these are the people you most want to turn to if you find yourself afflicted with some serious injury.... right?

Not in fiction. There, often the people with the greatest expertise in fixing injuries are those trained in inflicting them. Particularly if he or she follows the Path of Peace, a martial arts instructor is liable to be far better versed in treating physical trauma than ordinary doctors, and an Old Master will probably turn out to be a medical miracle worker.

This has some basis in fact; traditional kung fu training was often accompanied with instruction in Chinese medicine, and jujitsu masters were often trained bonesetters. Any good martial arts instructor should have some idea of how to respond to injuries likely to crop up during training. However, in fiction, this tends to be exaggerated to the point of martial arts masters offering the best medical care available, along with ridiculous fare like punching people to cure deformities and illnesses and the like.

Contrast Deadly Doctor, an actual doctor who uses their medical knowledge to harm, and Combat Medic, medics who also happen to kick ass.