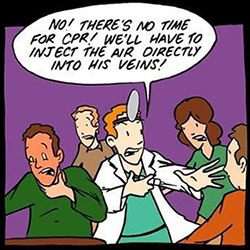 This is why you don’t get your medical license off the back of a cereal box.
"HMOs: We like saving lives, but we don't get all freaky about it!"
— Christopher Titus, Titus
Advertisement:

The human body is a delicate thing, and when a person is injured or sick it's vital to give them proper care to aid healing. Or, you could just stick some leeches on their arm and hope for the best.

This trope occurs when someone attempts to perform medicine despite not having the faintest idea what they're doing, and only succeeds in making things worse. They often have rather... creative ideas about what constitutes medical aid. If you find yourself in the care of one of these people, run away quickly and don't look back.

Common traits of these include using amputation for every malady, diagnosing mild illnesses as ridiculously lethal ones, using implements that obviously aren't medically safe (i.e. using a kitchen knife instead of a scalpel), or making use of obviously quack or seriously outdated methods. Quite frequently, if the erstwhile doctor doesn't simply kill their patient, they can manage medically impossible tasks solely through Achievements in Ignorance, like replacing someone's organs with objects in the vicinity or sewing functioning limbs on backwards.

Need not be performed by an actual doctor: any obviously terrible attempt at healing counts.

May overlap with Snake Oil Salesman, Phony Degree and I Have No Idea What I'm Doing.

Atun-Shei contracts COVID-19 and calls a doctor to help.

Atun-Shei contracts COVID-19 and calls a doctor to help.