Fanfic / The Writing on the Wall 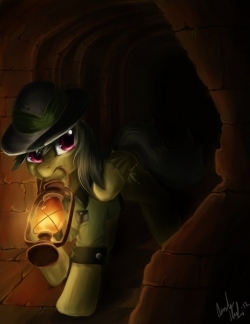 The Writing on the Wall is a My Little Pony: Friendship Is Magic fanfic by Horse Voice

. Daring Do is asked to help in the excavation of the most ancient tomb known to ponykind - tens of thousands of years older than the oldest known masonry, with incredible craft and skill going into the construction of the impressive edifice. Ancient text in a number of languages, all of them long since lost, is carved into every surface in one of the rooms of the structure nearest to the surface, likely some kind of curse meant to warn away would-be looters. Workers work to breach the walls below, to find the secrets of this ancient place, but perhaps they should have heeded the writing on the wall.

. It's also available in the print-on-demand anthology Nightmare Nights

Due to the nature of this story, even the names of many of the tropes involved in the story constitute major spoilers, and large sections of the text would need to be spoiled. As a result, do not open the below folder until you have read the entire story unless you want to be spoiled.