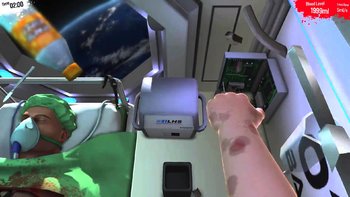 We have to operate — but we're IN SPACE!!
Dr. Edwards: We almost did a thoracotomy in the ER.
Dr. Grey: Yeah, this bought us some time.
Dr. Edwards: No, I mean we almost got to do a thoracotomy, in the ER. Which, you know, would have been amazing. [...] 'Cos, I mean, how many times do you get to operate outside the operating room?
Dr. Webber: Okay, for the record, it sounds fun, until you do it.
— Grey's Anatomy, "There's a Fine, Fine Line"
Advertisement:

Your standard Medical Drama will have a lot of emergency surgeries, most of which take place in an OR (the cooler sounding name for a simple operating room). But then, not all medical dramas focus on a surgical team. And let's not forget about the Rule of Drama. One way to get the right pulses racing is to have a Matter of Life and Death time-sensitive surgery and no place to operate... except where you are right now.

The most common perpetrators are in an ambulance or ER/trauma center (A&E/Casualty in the UK), but occasionally your doctors will have to operate in an abandoned warehouse, in the back of a taxi, or stranded in a forest.

It is also done in non-medical shows, or by characters other than the doctors in the medical show if necessary (usually leading to a big story about fixing the fix), with the emphasis being on the emergency situation causing them to need to bend procedure. Often, a Backalley Doctor will have to operate in a literal back-alley, and rarely if ever an OR — since that's normal for him, and part of the characterization, those instances go there.

This focuses on the story element of an unconventional surgery location and the associated drama, this drama constituting the danger of a necessary and immediate surgery; not having a suitable place and having to do the surgery out-of-OR; and the risks from performing surgery at that place.

See also Meatgrinder Surgery, a similar trope about operating without proper surgical tools, and Open Heart Dentistry, for when you can't find an appropriate physician for the surgery but get someone else with advanced medical training.

In some cases, this might overlap with After-Action Healing Drama if the rush to get to medical personnel is forgone for a rush to just heal.

And PSA: No matter how many episodes of Grey's you've seen, please Don't Try This at Home.

Dr. Hibbert removes a guy's appendix in the street. (There's also no anaesthetic or stitches required; but that's another story altogether.)

Alternative Title(s): Operate In The ER

Dr. Hibbert removes a guy's appendix in the street. (There's also no anaesthetic or stitches required; but that's another story altogether.)