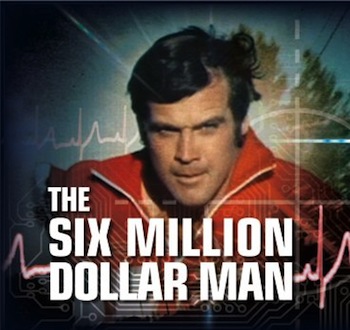 Flare collar included.
"Steve Austin, astronaut. A man barely alive. Gentlemen, we can rebuild him. We have the technology. We have the capability to make the world's first bionic man. Steve Austin will be that man. Better than he was before. Better. Stronger. Faster."
— Opening Narration
Advertisement:

The Six Million Dollar Man — the show that put "bionic" into the popular lexicon. More importantly, it set the stage for the Super Hero genre to be taken seriously in popular entertainment.

Lee Majors starred as Col. Steve Austin (no, not that one) in this sci-fi action-adventure series that ran from 1973 to 1978. Seriously injured in a test flight, former astronaut Austin is given artificial ("bionic") replacements for his legs, his right arm, and left eye, leaving him with superhuman speed and strength and telescopic vision. He can run more than 60 MPH, jump several stories, see objects from miles away and in the dark, and lift impossible weights. Upon his recovery, he goes to work for Oscar Goldman (Richard Anderson), head of the Office of Scientific Investigations (there are many other definitions for OSI out there — this is the one actually seen on TV). Other regular or recurring characters includes:

In a spring 1975 episode, Jaime Sommers (Lindsay Wagner), a tennis pro and Austin's love interest, is injured in a skydiving accident. Austin pleads with Goldman to save her life, and she too is fitted with bionic parts (legs, one arm, and an ear). Eventually her body rejects her implants, and she dies, at least as far as Austin is concerned. Fan outcry was so great, ABC demanded the series reorganize the start of the third season and run a two-parter bringing her back to life. So after Jaime is rescued by a radical medical procedure, she goes to work for the OSI in her own spinoff series, The Bionic Woman (1976-1978), living undercover as a schoolteacher on an Air Force base when not on missions for the OSI. And Jaime herself became a recurring character on Six Mil during its third and fourth seasons, taking part in a number of crossover stories until Bionic Woman was cancelled by ABC in 1977 and moved to NBC, ending these crossovers for good.

The Six Million Dollar Man was based upon the science fiction novel Cyborg by Martin Caidin, and the original pilot TV movie, aired in 1973, was written by Henri Simoun and an uncredited Steven Bochco (NYPD Blue). It was followed by two more TV movies produced by Glen Larson (Battlestar Galactica (1978)) that attempted, without success, to recast Austin as a James Bond-like character. When the series returned as a weekly hour-long show in January 1974, it was now produced by Harve Bennett (Star Trek), who restored much of Caidin's original characterization to Austin (though Caidin's version of the character was rather different — he was more of an assassin, carried a poison dart gun in a bionic finger, and his non-seeing bionic eye was a miniature camera). Later, Kenneth Johnson, who later went on to be involved with The Incredible Hulk (1977), Alien Nation, and V (1983), joined as a writer and went on to create the character of Jaime Sommers and produce the spin-off. Johnson advocated a somewhat "kindler, gentler" show, and it was in a two-parter he wrote that the show's most iconic recurring character, Bigfoot, first appeared.

The series was followed by made-for-TV movies in the late 1980s and early 1990s. In the last of these, Bionic Ever After? (1994), Steve and Jaime finally got married. As for bionic kids — Austin's estranged son by a pre-series marriage, Michael, appears in The Return of the Six-Million-Dollar Man and the Bionic Woman (1987), where he is fitted with bionics far, far exceeding those possessed by his father. In the second film, Bionic Showdown (1989), a new bionic woman named Kate Mason is introduced, played by Sandra Bullock in one of her first roles.

The series is known for its slow-motion special effects which, while often derided by some modern-day viewers, were in fact based upon similar slow-motion effects used by NFL Films in its acclaimed series of sports archive films (and even before that, films like Olympia had also used the technique). The slow-motion action actually wasn't consistently used until midway through the second season, but it was decided that speeding up the action usually didn't work, with Lee Majors on the 2010 DVD release of the series, saying, it looks like something out of the Keystone Cops. With CG effects still years away, slow-motion was the only practical option.

Majors, an acclaimed actor from such films as The Ballad of Andy Crocker and The Francis Gary Powers Story, but best known for his work in westerns like The Big Valley, was chosen because of his stoic demeanor, although episodes such as "The Coward" (in which Austin discovers the fate of his long-lost father), and "The Bionic Woman" showed that he had the range if he required it. His co-star, Richard Anderson (Forbidden Planet), played Oscar Goldman and provided a fatherly figure to both Steve and, later, Jaime. Three actors played Dr. Rudy Wells: Oscar-winner Martin Balsam in the first pilot, noted voice actor Alan Oppenheimer for the first 2 seasons, and Martin E. Brooks thereafter. In 1977, Anderson and Brooks made US TV history by becoming the first lead actors to play the same roles in two ongoing series on two competing networks, when they were allowed to appear on both Six Mil on ABC and Bionic Woman on NBC. They also reprised their roles for the later reunion films.

The show was immensely popular and served as a template for later sci-fi action-adventure shows that leaned more toward action-adventure than sci-fi. Glen Larson's Knight Rider, for instance, is cast from the same mold, although some elements were changed: the mortally-injured Michael Knight was given a talking supercar rather than superhuman abilities, and fought crime for a foundation rather than for the government. Jake 2.0 is a more recent homage, with Lee Majors actually appearing in an episode (and the "bionic sound" is heard more than once in the episode just to drive the point home).

In the 1970s, the utterly exorbitant $6 million seemed about the right cost to create a bionic man.note You might say it cost an arm and a leg. Oddly enough, due to the rapidly-falling costs of technology, it still seems about right, despite inflation. A proposed film remake starring Mark Wahlberg will be heavily inflation-adjusted with the name, "The Six Billion Dollar Man".