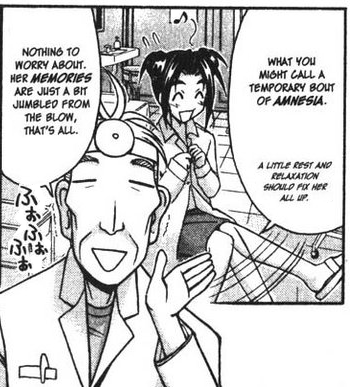 You might want to change physicians.
"Let me get this straight. Does anybody here not have amnesia?"
— Calculon, "All My Circuits", Futurama
Advertisement:

In the real world, amnesia is rare, and it can last anywhere from days to a lifetime. It comes in two flavors: psychogenic amnesia, which comes from a psychological trauma, and organic amnesia, which comes from brain damage. In the former case, the sufferer might get all or part of his memories back through adequate therapy and rest; in the latter, even if he might get back some pieces of information, he most probably will never recover the big picture.

On TV, amnesia is just a plot device for the current episode or movie or whatever, and it's pretty much always organic and originated by some kind of funny injury or physical impact. Everything and anything the character knows about him or herself may be lost, or just the last 24 hours may disappear — it's completely dependent on the plot. This is often used to avoid As You Know exposition by making it so the character doesn't know things they should be familiar with; whether it's actually an improvement is down to the individual viewer.

If the victim recovers, it usually occurs by the end of the episode, with the character simply bonking their noggin a second time (conveniently ignoring the fact that this is likely to make things worse, not better), or with some Applied Phlebotinum from the resident scientist/physician (which ignores that, as said above, the bonking type is precisely the kind of amnesia that rarely get better in real life). On the other hand, if the victim does not recover by the end of the episode, they almost certainly never will and those memories will be gone forever.

Do note that TV usually uses retrograde amnesia (the inability to recollect memories from before the head bump) but almost never uses the actually more organically realistic anterograde amnesia (the inability to create memories after the bump). While there have been a few examples recently, they have mostly been due to the popularity of the movie Memento. Even when it does appear in a show, what's depicted usually doesn't come close to the actual disorder. For a realistic breakdown, read up on the case of Clive Wearing

Expect a Non Sequitur, *Thud* before being out cold.

A single bonk on the head from a chandelier instantly gives the nightclub bouncer amnesia.

A single bonk on the head from a chandelier instantly gives the nightclub bouncer amnesia.