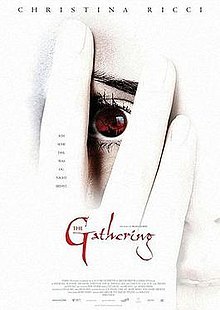 The Gathering is a 2002 Horror/Thriller film directed by Brian Gilbert and starring Christina Ricci, Ioan Gruffudd, Kerry Fox, Stephen Dillane, Simon Russell Beale, and Robert Hardy. An ancient buried church is found with an unusual altar piece involving a crucified Christ facing a bas-relief of onlookers, and Simon Kirkman (Dillane), an art historian with a background in authenticating religious relics, is called in to examine it by his estranged friend, Father Luke Fraser (Beale). Meanwhile, a young woman named Cassie Grant (Ricci) is accidentally struck by the car of Simon's wife, Marion (Fox). Cassie seems virtually unharmed by the impact other than an apparent loss of memory of everything but her name, but Marion insists on taking her in until she recovers. Cassie grows to care for Simon and Marion's two young children, Michael and Emma, but is troubled by premonitions of the death of several people in the village as well as strange dreams and seeing people that she recognizes in the village who just stare at her.

Gradually, Cassie comes to realize that there is something more sinister going on with these people she recognizes, that they may be tied to an upcoming disaster, even as Simon and Luke come to realize the ties to the contents of the church, which was possibly founded by St. Joseph of Arimathea.