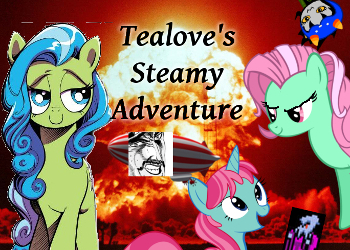 A My Little Pony: Friendship Is Magic Round Robin fanfic by Insaneponyauthor, set in the same 'verse as Derailed.

An unusual conversation convinces Ponyville's premier tea merchant to embark on a journey to find a tea plant with magic powers. To find ... the Scary Purple Dragon Tea! Or was it White Dragon Bush? Epic Tea Leaves? Oh brother ...

Tealove travels from the skies above Equestria, to the caves below, to its darkest, most dangerous forests. She contends with monsters, trolls, mad scientists, insane cultists, and teammates who aren't what they seem. But the greatest threat Tealove faces on her quest is the complete lack of consistency. The backstories, motivations, and allegiances of everypony she meets change at the drop of a hat. It's almost like she's being written by a team of authors who aren't communicating with each other at all. Who can Tealove trust, when she can't even keep the most basic details of her own quest straight?

It also has a loose sequel, Diamond and Silver's Excellent Adventure, which follows a different set of protagonists but resumes a lot of the unresolved plot threads from this story.