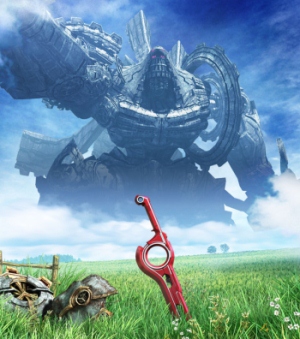 "I don't know what the future holds. But that means... I can imagine all the possibilities."
Long ago, the world was nothing more than an endless sea cloaked in a boundless sky, reaching as far as could possibly be imagined. Then two great titans came into existence: the Bionis and the Mechonis. The titans were locked in a timeless battle, until at last...only their lifeless corpses remained. Eons have passed. Now, our world, this vast land stretching across the remains of the Bionis, is under attack from a relentless force known as the Mechon.
— Shulk, in the opening narration
Advertisement:

Xenoblade Chroniclesnote  simply Xenoblade in Japan is an action Japanese role playing game for the Wii console, developed by Monolith Soft and published and produced by Nintendo. While Takahashi originally did not intend the game to be related to his previous creations, beginning its life as a totally unrelated story called Monado: Beginning of the World, it became the Spiritual Successor to the Xenosaga series of Eastern RPGs for the PlayStation 2, which itself was a spiritual successor to SquareSoft's Xenogears, after Satoru Iwata suggested the Xeno title be added late into production to honor Tetsuya Takahashi's history and struggles in the industry. After the game's success, more traditional Xeno elements would be retroactively added into the sequels, seemingly resurrecting the Perfect Works storyline from Xenogears and Xenosaga in a form even its creator couldn't have predicted.

It was released in Japan on June 10th, 2010, after Nintendo had delayed the game to allow Monolith to finally deliver a game close to their original vision after their long history of problems. This game saw Takahashi adopt a style of directing and writing that matched what most modern game developers view as the optimal strategy when in a game is in preproduction of creating mechanics then writing a story around them instead of the other way around as had been the case in Xenogears and Xenosaga, aka visions in this case, that is seen in his future projects resulting in vastly different narrative experiences from his older works. After much fighting from the fans, it was released in Europe on August 19th, 2011, and translated to English, French, German, Spanish and Italian. After much fan demand, the game reached American grounds in April of 2012. Unfortunately, due to the game's highly limited run, the original release became incredibly hard to find, making it hard for fans late to the game to own the whole "set" of Wii Role Playing Games, made up of this, The Last Story, and Pandora's Tower.

for the fourth Super Smash Bros. game. It was released April 10th, 2015. A Shulk amiibo was released in the Wave 3 of Super Smash Bros. amiibo and unlocks bonus costumes in specific gamesnote more specifically Super Mario Maker, Yoshi's Woolly World, and Chibi-Robo!! Zip Lash. Using it in Kirby: Planet Robobot gives the ESP ability to Kirby. It can also be used to train a "Figure Player" in Super Smash Bros. for Nintendo 3DS and Wii U and gives coins for the collectibles shop in Xenoblade Chronicles 3DS. The original Wii version also came out on the Wii U Virtual Console in Europe on August 5, 2015, and later in North America on April 28, 2016. Also, Fiora appeared as a Nintendo Guest Fighter in the crossover video game Project X Zone 2 alongside her Spiritual Predecessor KOS-MOS from Xenosaga; several Mechon, including the dreaded Metal Face, also appear as enemy units.

open/close all folders
Tropes # to C
Tropes D to F
Tropes G to I
Tropes J to L
Tropes M to O
Tropes P to R
Tropes S to U
Tropes V to Z
Future Connected
Shulk: Cool! Let's keep this up!
Reyn: Man, what a buncha' jokers!
Fiora: Let's press on, and on, and ON!
Feedback