As Lethal as It Needs to Be 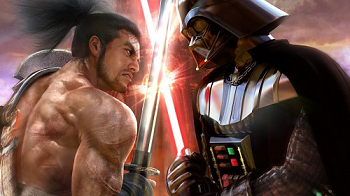 No blade is sharper than the plot.

The Hero is doing his usual thing: battering mooks left and right with his trusty Phlebotinum Sword and leaving them out cold. Except for that one mook who he clearly just gutted. With the same sword and with the same moves. How?

Because we said so. That's why.

This trope is all about weapons or attacks that seem to jump between lethal and non-lethal as the plot demands. They throw one, and it cuts through a steel cable, next throw, it knocks someone out without even drawing blood. No explanation as to why said weapon's killing power seems to come and go. It simply does.

Energy attacks are great for this because the audience has no idea of what it's like to be hit by a ki blast and as a result, it can do whatever it needs to do. Additionally, energy attacks often depend on how fine the user's control of the technique is - obviously there is skill involved in swinging a sword too, but a sword is objectively sharp whereas the hero may only have gathered enough energy for a haphazard, ineffective blast that time.

This is where an obsession with Power Levels can be a disadvantage - if you've given the audience a statistic that says the character should be able to do (or withstand) a stronger attack than that, they're going to start asking questions if they then couldn't.

Compare with Inverse Law of Utility and Lethality and Inverse Law of Sharpness and Accuracy. Contrast with Stun Guns, which are something a bit different, and Nerf Arm. See also: Bloodless Carnage, Could Have Been Messy.

When the lethality varies depending on who it hits, that's Almost Lethal Weapons.