Series / The Hero Yoshihiko and the Devil King's Castle 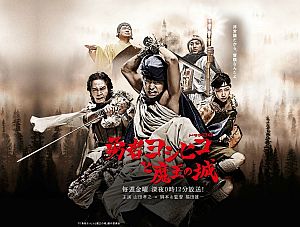 A Low Budget Action-Adventure Series (low budget not visible in this picture)
"Back off the Buddha!"
Advertisement:

Yuusha Yoshihiko to Maou no Shiro is the story of Yoshihiko, who has been given the quest to find the legendary miracle herb that will save his village from a terrible plague, as well as find his father, who has gone before him. He is then tasked by the great Buddha to destroy the Demon King, who has started said plague... and stuff. Or so the story is supposed to go.