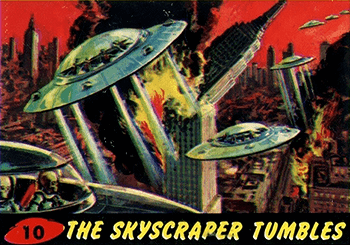 So, do you think they're friendly?
"This isn't a war. It never was a war, any more than there's war between man and ants."
— The Artilleryman, The War of the Worlds
Advertisement:

One of the oldest stories in Speculative Fiction: Beings from space come to Earth to conquer.

There are a few ways this can go:

Sometimes, there are good aliens that help us against the invaders; unfortunately, they tend to be much weaker and/or less numerous, since if they were equally or more powerful, the focus would be taken off humanity. Then there's the Benevolent Alien Invasion, where the invaders are the good aliens.

Often an allegory for some Earth-based conflict, either one that's happened in the past or one that people fear may happen. The Infiltration is especially popular as a metaphor for the Red Scare.

This trope, in its modern form, was created by H. G. Wells's novel The War of the Worlds. It was actually a variation on another theme popular at the time, the "invasion story", where another country's army, usually France or Germany (depending on who relations were worse with at the time), would try to conquer Britain. Xenophobia would often play up the foreigness of said foreign empires with the aliens in The War Of The Worlds themselves being an allegory for for imperialist powers invading and exploting supposedly "inferior people", the narrator noting that the Martian invasion wasn't so different from what Britain was doing around the world itself. Then World War I happened. Today, similar themes are found in techno-thrillers, and crop up in works like Red Dawn (1984) and The Tomorrow Series, where similar feelings of dread at being dominated by a foreign and advanced enemy proliferate.

A common Tomato Surprise nowadays is for the invaders to be human.

Most often a Science Fiction trope, but occasionally appears in Fantasy, in which case you have Fantasy Aliens.

See also Easily Thwarted Alien Invasion, We Come in Peace — Shoot to Kill and Aliens Are Bastards; and for fun, How to Invade an Alien Planet and Why You Should Destroy the Planet Earth. Contrast Benevolent Alien Invasion.