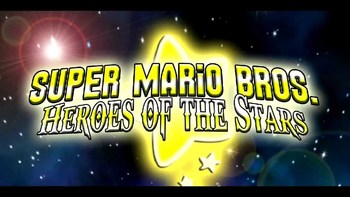 , which can be seen here

Set after the events of Super Mario Galaxy, Mario and Princess Peach go on a picnic, only to be attacked by Bowser yet again. In the midst of the fight, however, they find themselves dealing with an Alien Invasion from the Shroobs, who plot to Take Over the World with only Mario, Luigi, Yoshi, and Bowser standing in their way. To do so, they require the help of the Star Spirits, whom the Shroobs have imprisoned.

Super Mario Bros.: Heroes of the Stars contains examples of the following tropes: