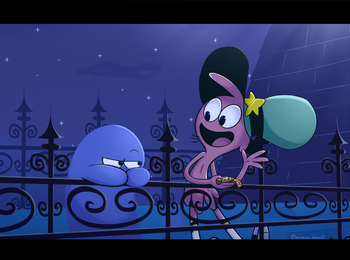 Wander over Foster's AU One-Shot's Cover Picture
"Howdy, little fella! The folks call me Wander, and I really like your house! Nice to meet ya!"
Advertisement:

) is a crossover fanfic between Wander over Yonder and Foster's Home for Imaginary Friends. It revolves around Wander turning up at Foster's while he's stuck on Earth.

One day, Coco brings an injured and unconscious Wander back home to Foster's Home for Imaginary Friends. He had appeared in the backyard and, due to his inhuman looks, it was assumed that he was an abandoned Imaginary Friend. Bloo soon becomes jealous of Wander's charismatic nature and devises a plan to make himself the center of attention again.

While investigating Wander, Bloo makes an amazing discovery: Wander is an alien! Too bad no one believes Bloo.