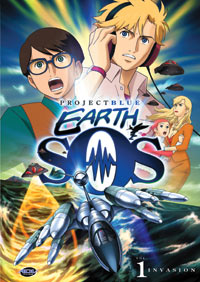 From left to right: Billy, Penny, Lotta, and Emely.
Advertisement:

Project Blue Earth SOS, directed by Tensai Okamura and animated by A.C.G.T.,note with TMS Entertainment co-producing the last two episodes is a six-episode OVA series set in an alternate version of the nineties. In a review for the first DVD volume, Anime News Network's Carl Kimlinger had called the show as a "throw back to the gee-wiz adventures of 50's B-cinema and the likes of Tom Swift".

The story is as follows: petroleum-based energy has become obsolete due to the efficient, powerful, and renewable energy of the G-Reaction engines. On January 1, 1995, a G-Reactive fighter plane was being tested, while it was hit by a mysterious rainbow light and disappeared. In 1999, two boys, Billy Kimura and Penny Carter, view similar events occur right before their eyes. Realizing that something is up, the two boys take it upon themselves to get to the bottom of the strange occurrences. Eventually, they learn of an Alien Invasion and the government's efforts to defend the earth from this impending threat.

The series' setting is made to be what some people in the mid-twentieth century would imagine the future to be like. That, coupled with the series' flow and sheer over-the-top nature is very reminiscent of the legendary Giant Robo OVA series. It's an intentional homage to science fiction TV shows of the black-and-white era, complete with campy designs for alien weaponry and human technology, overacting on the part of minor characters, and two young heroes.