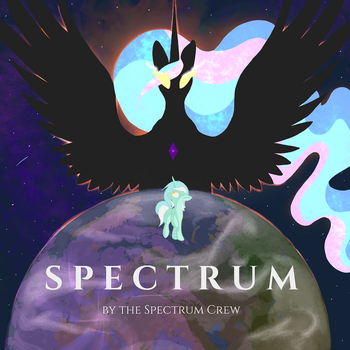 "We're not going to make the same mistakes this time. Sure, we'll probably make new ones. But not the same ones. I may not be the best person to offer help... yet I'm someone who can help, all the same."
— Cap. Alexander Reiner
Advertisement:

is a My Little Pony: Friendship Is Magic fanfic by Team Spectrum, a group of authors headed by Sledge115. Comprising the team are VoxAdam and RoyalPsycho, as well as formerly TheIdiot, Doctor Fluffy, Kizuna Tallis, ProudToBe, TB3, Jed R and The Void. Following the discontinuation of The Conversion Bureau: The Other Side of the Spectrum, it serves as the main story in a Continuity Reboot of the Spectrumverse.

On a beautiful day of sight-seeing in the Everfree Forest, Lyra Heartstrings stumbles across the Tree of Harmony and witnesses a magical portal release a creature such as she has always wished to meet - a human. Yet wonder soon gives way to fear as the human, a soldier named Alexander Reiner, reveals that his homeworld of Earth is under threat... by Queen Celestia, and a corrupted Equestria.

Upon learning that the human race is faced with the Sadistic Choice between extinction or the total enslavement that is Conversion, Princess Celestia, Lyra Heartstrings and the Bearers of Harmony vow to come to the aid of the alliance between mankind and humanity's sympathizers, and hopefully, uncover the source of the madness which has taken hold of the fallen Celestia...

What starts off as a spin on The Conversion Bureau gradually evolves into an Ultimate Universe of My Little Pony: Friendship Is Magic and MLP Generation 4, packing in elements from the comic books, the tie-in storybooks and the 2017 Movie alongside several familiar concepts from the fandom, such as Human-in-Equestria, Ponies-on-Earth, G1-to-G4, a Solar Empire or a hidden sister of Celestia and Luna's, all with the stated purpose of tying them together into one cohesive whole.

Side-stories in this 'verse include:

A timeline of "Prime" or "Sunny" Equestria can be found here

, with unmarked spoilers up to Act II's ending. You have been warned.