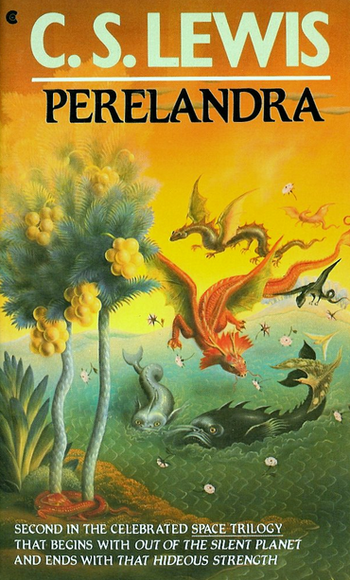 The second volume of The Space Trilogy by C. S. Lewis.
Advertisement:

In Perelandra, also known as Voyage to Venus, it is revealed that the eldila have kept in contact with Ransom since his trip to the Heavens, and now Ransom has been given a Mission From Maleldil to visit Perelandra (i.e. Venus). He finds the planet to be covered in oceans and floating islands, and its inhabitants living a literally Edenic existence.

Ransom makes the acquaintance of the planet's Queen, and discovers that she and the King (who has been missing for the past few days) are the only intelligent inhabitants. The peace is shattered by the arrival of another space-ship, bearing Weston—and with him, an eldil of Thulcandra, bent on corrupting this young world.

Ransom realizes that he was sent to Perelandra to prevent this from happening—by words, and if necessary, by force.

As a side-note, this was Lewis' personal favorite of everything he wrote.