Film / The Whisperer in Darkness 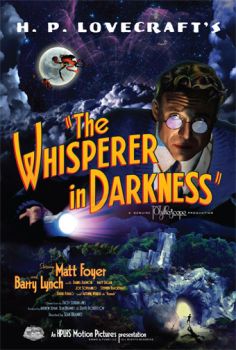 The Whisperer in Darkness is a 2011 science fiction film based on the 1931 novella by H. P. Lovecraft.

It was produced by Sean Branney, Andrew Leman, and David Robertson and distributed by the HP Lovecraft Historical Society. As per HPLHS's The Call of Cthulhu, it uses the Mythoscope blend of vintage and modern filming techniques to produce the look of a 1930s-era Universal Horror film, though given the era this one is a talkie instead of a silent film.