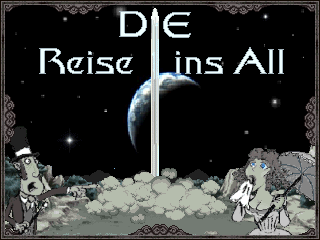 The start menu of the game, giving the idea of an old silent movie.
Advertisement:

is a free German Steampunk game made in RPG Maker. Its title translates to The Journey to Space, and it is set in our world at the end of the 19th century. The game was influenced by the works of Verne, Doyle, and Wells, with a crazy inventor, giant canons to travel to Mars and an following invasion.

The player will play partly only with one or two heroes but will collect a group of four people over time. In the end, these are: