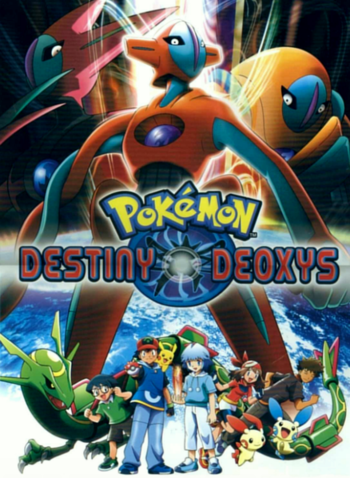 Their destinies will be put against the ultimate being.
Advertisement:

Pokémon: Destiny Deoxys is the seventh Pokémon: The Series movie, and the second and final film set in the Hoenn region.

Four years ago, a meteor containing the legendary Pokémon Deoxys crashed into an icy continent. The legendary Pokémon of the ozone layer, Rayquaza, engaged it in a fierce battle which ended with Deoxys seemingly destroyed. A group of researchers witness the battle and take the crystalline remains home with them, while their young son picks up a phobia of Pokémon from the experience.

Flash forward to the present where Ash and friends arrive in futuristic LaRousse City, famed for its Battle Tower, just in time for Deoxys to be revived, block off the city from the outside and start causing chaos. They team up with the aforementioned researchers and a group of other trainers to find a way to calm Deoxys down.

This is the first Pokémon movie to not be preceded by a Pikachu short, and it perhaps shows. In North America, the movie skipped a theatrical release, premiering on Kids' WB! where it pulled in higher ratings than the network had got in the entire previous year.