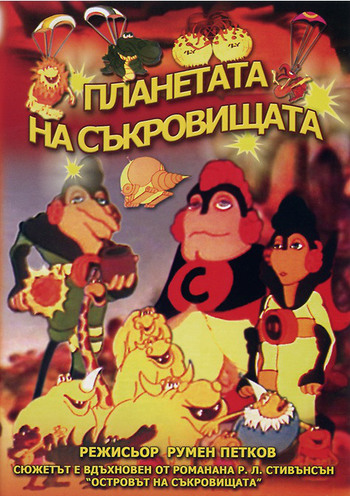 "Give me the black spot, will he?!"
Advertisement:

Similar to the 2002 Disney production Treasure Planet, the film takes the basic premise of Treasure Island and transfers it into a science fiction setting. The hero, a alien named Philip, discovers a star map inside the luggage of deceased astronaut Billy Bones and subsequently finds himself pursued by a group of greedy and ruthless space pirates. Young Philip sets off to follow the star map to the position of a precious treasure. During his voyage aboard Captain Smollett’s spaceship, the Hispaniola, he struggles with the nefarious plots of John Supersilver and the other space pirates. Overcoming magnetic storms and holes in the space/time continuum, the spaceship lands on the Treasure Planet. There, Philip and Captain Smollett defeat monsters and escape gigantic laser traps in pursuit of their treasure.

What the film lacks in the art and plotting departments, it more than makes up for in its sheer weirdness.

This certainly isn't the Disney movie...

It's much, MUCH, weirder.

This certainly isn't the Disney movie...

It's much, MUCH, weirder.