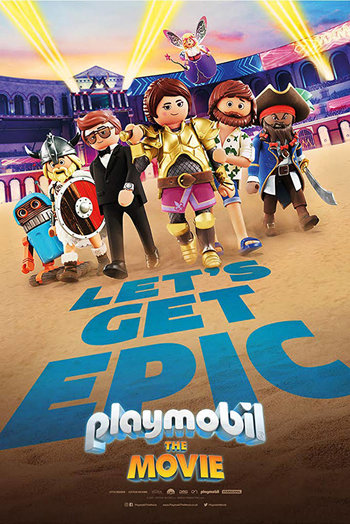 Playmobil: The Movie is an English-language French live-action/computer animated adventure musical comedy film based on the German building toy Playmobil. It is directed by Lino Disalvo in his directorial debut, written by Greg Erb and Jason Oremland with an early draft by Blaise Hemingway, and produced by On Animation Studios. The film stars the voices of Anya Taylor-Joy, Gabriel Bateman, Daniel Radcliffe, Jim Gaffigan, Meghan Trainor and Adam Lambert. It was released on 7 August 2019 in France by Pathé, and on 6 December 2019 in the United States by STXfilms

The plot centers around a girl named Marla, who sees her younger brother Charlie disappear into the world of Playmobil. Going after him, she's turned into a living Playmobil toy and has to team up with other Playmobil toys to save Charlie.

Playmobil: The Movie provides examples of: