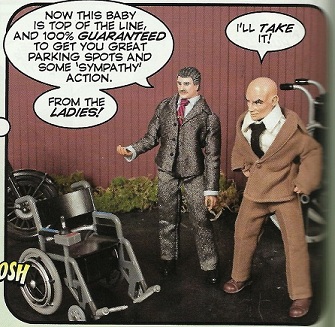 "Ware the man who fakes a limp."
— The Gunslinger, The Dark Tower

Sometimes a person with an apparent disability will be more than they seem. Sometimes they will turn out not to be disabled at all. The reasons for faking a disability vary, but it is usually to cause others to underestimate them.

A particular form occurs in Crime and Punishment Series where one suspect will be obviously be ruled out because they are in a wheelchair and physically incapable of committing the crime. However, at The Summation, the detective announces that the criminal is in fact the paraplegic. This is then followed by the supposed paraplegic getting up and attempting to run. Another variant, commonly used in Courtroom Episodes, involves an Ambulance Chaser lawyer persuading his client to feign injury such as whiplash in order to win a Frivolous Lawsuit settlement. Or the Staged Pedestrian Accident, where the "victim" allows himself to get hit by a car, and does a gruesome-looking but harmless tumble.

It is worth noting that a lot of disabled people may occasionally give the appearance of this trope, when it is anything but. Some conditions might require the use of a wheelchair to avoid exhaustion or discomfort, even though the person is technically capable of standing up and walking for a short while. Others disabilities can be a milder form of a more well-known condition, but make no mistake: the person in question is still disabled, and they're emphatically not faking it.

See also Faking Amnesia, Obfuscating Stupidity, Obfuscating Insanity, Pillow Pregnancy, Playing Sick, and Disability as an Excuse for Jerkassery. Contrast Throwing Off the Disability, when a genuinely disabled person makes a miraculous recovery, and Hiding the Handicap, where a person conceals his disability. A villainous character who actually is disabled is an Evil Cripple.