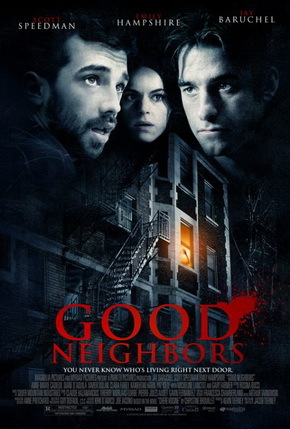 Good Neighbors is a 2010 Canadian thriller and black comedy directed by Jacob Tierney, based on a book by Chrystine Brouillet, starring Jay Baruchel, Emily Hampshire, Scott Speedman, and Xavier Dolan, and set in Notre-Dame-de-Grâce, a neighborhood of Montreal. Louise (Hampshire) is a waitress at a Chinese restaurant who is obsessed with recent murders in the town, convinced they're the work of a serial killer. Spencer (Speedman) is her friend downstairs neighbor, a suave wheelchair-bound gentleman. Victor (Baruchel) moves into the apartment on the fourth floor, and quickly becomes attached to Louise, but is barely tolerated by Spencer.

After a co-worker of Louise's becomes the fourth victim, Victor starts to spend more time with Louise, bonding on their shared experience of cat-ownership, and begins to tell people that she's his fiancé. While Spencer grows more annoyed at how awkward Victor is, Louise's cats turn up dead apparently at the hand of Valérie their upstairs neighbor, and the killer strikes again. So, what's with the dark figure who was seen climbing the fire escape of their apartment that night and others? And when will Louise learn that she's become engaged to Victor?

No relation to the 1970s The Good Life series, which was released as Good Neighbors in the United States.