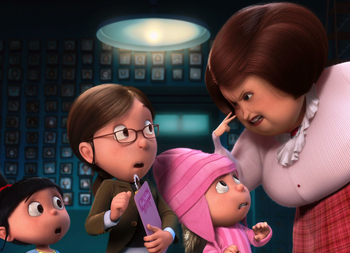 Bitch.
"The headmistress is an evil, cruel woman. They call her Grelod the Kind. But she's not kind. She's terrible — to all of us!"
— Aventus Aretino, The Elder Scrolls V: Skyrim

In any good Orphanage of Fear or Boarding School of Horrors, especially one for girls, there will probably a wicked governess or headmistress who delights in frightening and tormenting the children under her care. Under her, meals are small and usually served cold, mattresses are hard, and punishments are severe.

Among the various children in the orphanage, she may or may not have a particular target for her oppression. She is marked by her cold demeanor and lack of feeling. She often seems to have no concept of the fact that she is there to serve the children under her, and may insist that they serve her instead.