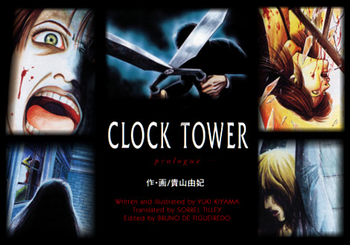 The original survival horror franchise.
Modern horror games tend to consist of you, your gun, absurdly copious amounts of ammo, and a plague of zombies. Or ghosts. But the point is, you have a gun, or at the very least a crowbar or something.
Advertisement:

Human Entertainment'snote As of 2019, the IP belongs to Capcom, jointly with Sunsoft. Clock Tower Survival Horror series doesn't work like that.

With the exception of a few sequences in the third and fourth games, your character is an utterly helpless girl going up against an unstoppable creature bent on killing you. In short, a Slasher Movie turned video game. If you want to live, you're going to have to keep your wits about you, and not do stupid things like play the piano noisily, or tempt fate by repeatedly returning to the scene of a Cat Scare.

The series has four games:

Though not part of the series proper, Haunting Ground was initially developed to be a continuation of the series and shares the visual and play style of Clock Tower 3.

The series went dormant for a decade, however Hifumi Kono, the director of the first two Clock Tower games, announced during the 2014 Tokyo Game Show that his new company Nude Maker was working a spiritual successor to the series under the working title Project Scissors, along with the help of Masahiro Ito of Silent Hill fame, Ju-on director Takashi Shimizu, and Metal Gear Solid 4 composer Nobuko Toda working on the project. The game has since been released under the name Night Cry.

Not to be confused with the trope, Clock Tower.