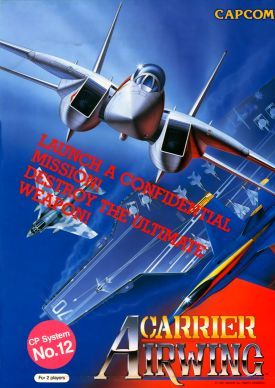 Carrier Airwing (aka U.S. Navy in Japan) is an Horizontal Scrolling Shooter from Capcom, released exclusively in arcades in 1990 and the Spiritual Successor of the previous Area 88 (aka U.N. Squadron in English) game released previously.
Advertisement:

The story of the game (at least in the English version) is the following: In the 90s, former political rivals decided to put aside their differences for once, but a Middle-Eastern country named Rabu decides to destroy that peace by invading most of Europe, the entirety of the Middle East and most of East Asia. The straw that broke the spleen was the invasion of Rabu to Japan in order to take control of the Japanese technology. Japan, being an American ally, causes the U.S. to take matters in their hands and its up to three brave American pilots (Rick Ford, Mark Olson, and James Roy) from the USS Carl Vinson

aircraft carrier to put an end to Rabu's invasion to Japan and their plans to world domination.

This games is notable for many reasons: Originally the game was planned as a sequel of Area 88 (U.N. Squadron) game, but Capcom lost the rights along the way, so they came out with an original story, with the same staff who developed the previous game. Also, the game, with some glaring exceptions, is more down-to-earth and a little bit more grounded on reality than its predecessor, as includes both real American and Russian military hardware in the game.