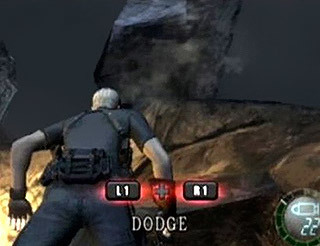 It has origins in the LaserDisc arcade game Dragon's Lair (though appearing earlier in the ArcadeGames Wild Gunman and The Driver), the gameplay of which consisted entirely of these; it was pretty much a cartoon where you had to press buttons at the right time for the story to continue. (Exactly the right time, often without any sort of prompt.) The following year, Ninja Hayate improved on this formula by introducing on-screen button prompts. The Sega arcade game Die Hard Arcade and the Sega Dreamcast games Shenmue and Sword of the Berserk: Guts' Rage introduced them to the action and action-adventure genres.

Upon being caught by a belcher, you must rapidly press E until it releases, or else face death.

Upon being caught by a belcher, you must rapidly press E until it releases, or else face death.